skip to main | skip to sidebar

I happened to stumble upon this guys blog:

He puts up some great pictures of some guys praetorian army, including guys in kilts and a Leman Russ converted to a markI style tank. 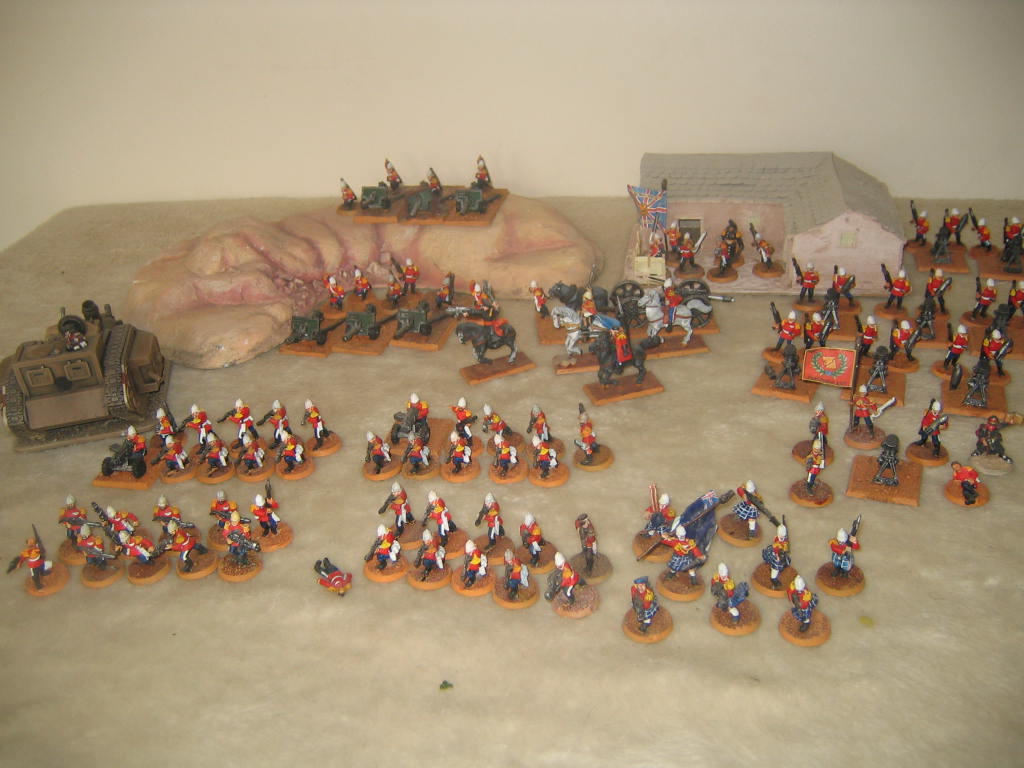 Unfortunately the picture below is the best picture and only picture that shows the highlanders and tank, so it's a little difficult to make out any details. Very nice though all the same.


Whilst on inspiration, I got my grubby little hands on IA5 - The Siege of Vrak with the Death Korps of Krieg army list in. A very nice army list, that lets you field Rough Rider HQs, Heavy Mortars as elites, heroic senior officers in any and all command squads and other goodies. They also have hardened fighters, die hards and Iron Discipline across the board, which is nice but makes the troops rather expensive for what you get. It might make the Highlander army more fluffy, but I'm a bit loathed to dish out all those points for hardened fighters and die hards. But the mortars and rough rider commands squads look very nice.

As a result of looking at this army list I've been thinking again about my own planned army and wondering if I shouldn't just forgot the tanks. True it makes the list less manoverable, but I could add tons more troops and maybe get a better force as a result - watch this space.
Posted by dijit80 at 12:26 59 comments:

Well I've begun work on the bagpiper. The idea is to have a separate torso which I'll then mould and use as medics in the command squads. Anyway let me show you what I've done. Its no where near finished yet. I used around 30mins on it last night, after watching Val Helsing (got lots of cool ideas for a Vampire Counts army, but thats soemthing else altogether.) 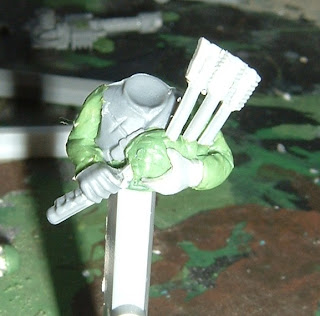 Well, its been Christmas and I've not done a great deal over Christmas, as I had to pack them away while various folks came to stay. I got them out again last weekend and have been working on a few odds and ends. I tried putting pleats on the back of the kilts, but in the end I decided it looked too confusing so I've scrapped that idea. I've also built a few heavy weapons - missile launcher, las-cannon and a heavy bolter. I've also done 2 arms holding claymores, added more detail to the flamer and made a shotgun arm. What I've done can be seen in the top picture. Below that are parts I've already completed. Almost ready to start casting. The guy I was hoping to help me cast them seems to have backed out, so it looks like I'll be doing them myself - help! I've got a few websites with materials, so now got to work out how much I need and which is the cheapest.

Well after spenting the last week drawing up plans for my tanks, I sat down the night before last and half made one out of a cornflakes packet. This has taught me a few things:
1 - its a very good idea to do it as you notice all your mistakes beforehand...I hope
2 - celotape is hopeless at holding the bits together
3 - my plans need to be altered significantly
4- 2mm makes a BIG difference!
Posted by dijit80 at 10:05 No comments:

Well I've been busy, the 'greens' (its great to be able to use technical words like that) are almost finished, I've got a few heads to do, a couple more arms (especially claymore waving ones), and after seeing the photos I think I want to redo some of the cuffs - they look rather puffy on some of them. I've also altered the lasguns as suggested by Col. Gravis, and moved the lasgun cartridge up the gun and removed part of the firing mechanism to make it fit - they look much better. Well here's some pictures of what I've done so far, please bear in mind they're only bluetacked together...

Riflemen Macleod and Stewart practice their marksmanship under the eye of Sergeant Gordon: 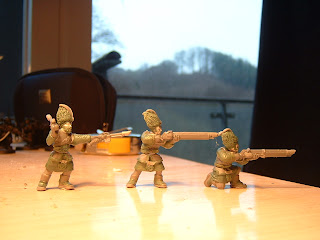 Here we have special weapons troopers MacColla, MacCann, and Kennedy: 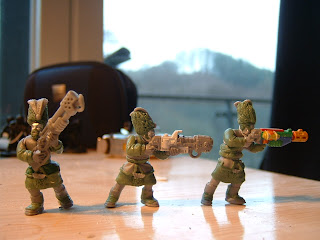 Stumbled again on various steam tanks on a link from 'Yours in a white wine sauce'. Truely inspirational for idea.
http://www.ironcladminiatures.co.uk/21721.html

Heres 2 of their tanks. Plans are moving with my designs. I'm currently sketching something, its heavily based on the Mark1-5 type tanks from WWI, plus a turret. Hopefully I'll have something to show soon.
Posted by dijit80 at 12:49 2 comments:

Well while searching for pictures and information about the MK1 tanks of World War 1, I stumbled across this video, pretty good for a general idea asto what they look like:

I'm pretty sure the first clip shows a group of soldiers in kilts! There's also another clip were they charge out of the trenches were they're definately in kilts - doesn't get much better.

I also found this video:

Unfortunately embeding it has been disabled... but it has loads of really good footage and not least a great soundtrack! (watch it and you'll understand)
Posted by dijit80 at 15:17 4 comments:

dijit80
Denmark
As an avid gamer and modeller of 16 years experience, I have a yearning for unusual armies. This blog follws the latest of my ventures.